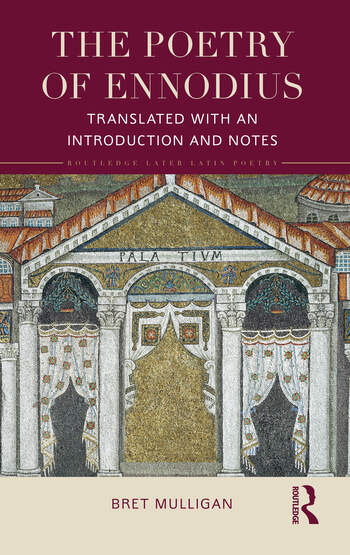 The Poetry of Ennodius offers the first translation into English verse of the entire eclectic corpus of sacred and secular poetry by Magnus Felix Ennodius (c. 473/4–521 CE), amply supplemented by detailed notes that elucidate the literary and cultural references essential for understanding this poet.

Ennodius’ poetry offers the reader a remarkable window into how Roman literary culture continued to thrive in the aftermath of the traditional “fall” of Rome in 476 CE. A prolific writer of prose and poetry, Ennodius played an active role in the political and ecclesiastical disputes of Ostrogothic Italy, and he stands as an important exemplar of late antique literary culture. Readers of this volume will encounter esteemed bishops, delicate objects, pets, stately churches, fools, villains, and more in vivid panegyrics, travelogues, hymns, epistles, and epigrams found in the sweeping poetic archive assembled after Ennodius’ death. From the grandiose “Declamation for the anniversary of the holy and most blessed Bishop Epiphanius in his 30th year as bishop of Pavia” to self-depricating descriptions of silverware that bears the poet’s image, Ennodius’ poetry sports with the expectations of his audience, composing verse that modulates from the beautiful to the conventional to the stunningly unusual, while always displaying an intimate knowledge of the literary traditions in which he writes and a deep engagement with previous authors, both from the distant classical past and the contemporary world of late antique prose and poetry. Through these poems, the reader can gain an appreciation of the intellectual and aesthetic world of an important bishop (and future saint) in the early sixth-century CE.

Featuring a lucid line-by-line verse translation from the Latin and extensive notes—both firsts in English—richly introduced by a scholarly introduction to Ennodius, his works, and era, and complemented by a comprehensive bibliography, The Poetry of Ennodius makes these works accessible for the first time to readers unfamiliar with Latin as well as those seeking a guide into the labyrinthine literary world of this challenging but rewarding poet. Students of the classics, late antique and medieval history, comparative literature, and early Christianity, as well as any independent reader interested in the enduring presence of classical Latin verse, will benefit from this book.